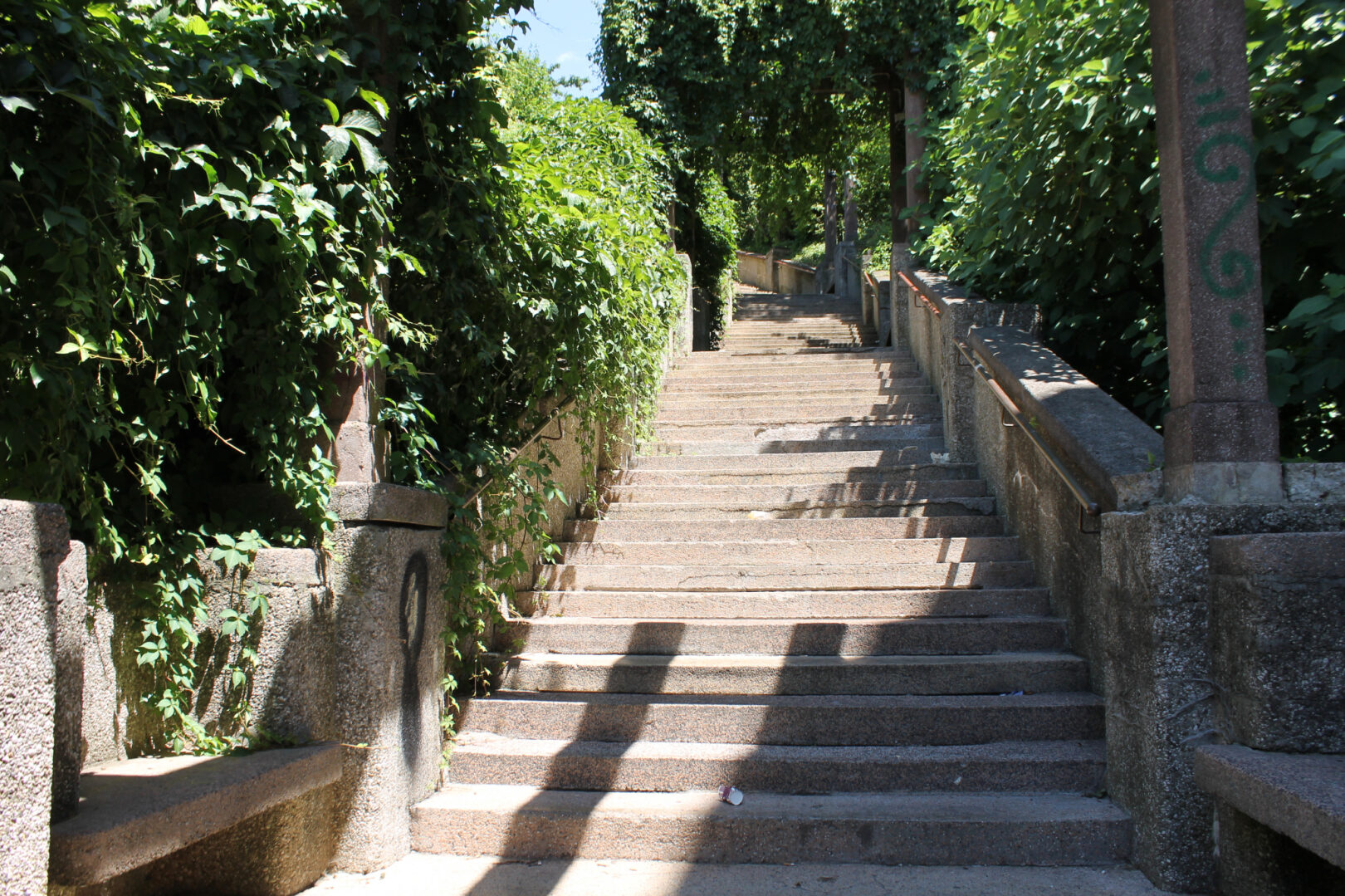 Zagreb is indeed quite hilly on its north side, which means there are a lot of paths and stairways that take you up. Yet the most distinguished ones are the most unnoticeable ones. The winding, blended-in stairs are far more than just a functional connection between the lower and the upper point, even if that’s not clear at the first glance.

You’re standing at the bottom of a hill with two stairways in front of you. The first one is a  luxurious wide staircase that goes straight to the top of the hill, full of lavish details, such as fantastic creatures or incredible flower ornaments. The other one, you hardly even noticed it. There’s nothing that attracts your attention at first glance, except maybe that it’s winding, so it will take a bit longer to get to the top of the hill. Which one do you choose?

If your choice is the monumental looks of number one, read on as I’m going to try to convince you to go for the other one. If your choice is number two, then why aren’t you in Zagreb already? If the task to chose your favorite staircase alone was already fun enough,  I have some extra perks for you. When in Zagreb, try to choose between all of the stairways of Zagreb, big and small, narrow and long, wooden or stone, around the hills in the narrow city center.

Zagreb is indeed quite hilly on its north side, which means there are a lot of paths and stairways that take you up. Yet the most distinguished ones are the most unnoticeable ones. The winding, blended-in stairs are far more than just a functional connection between the lower and the upper point, even if that’s not clear at the first glance. 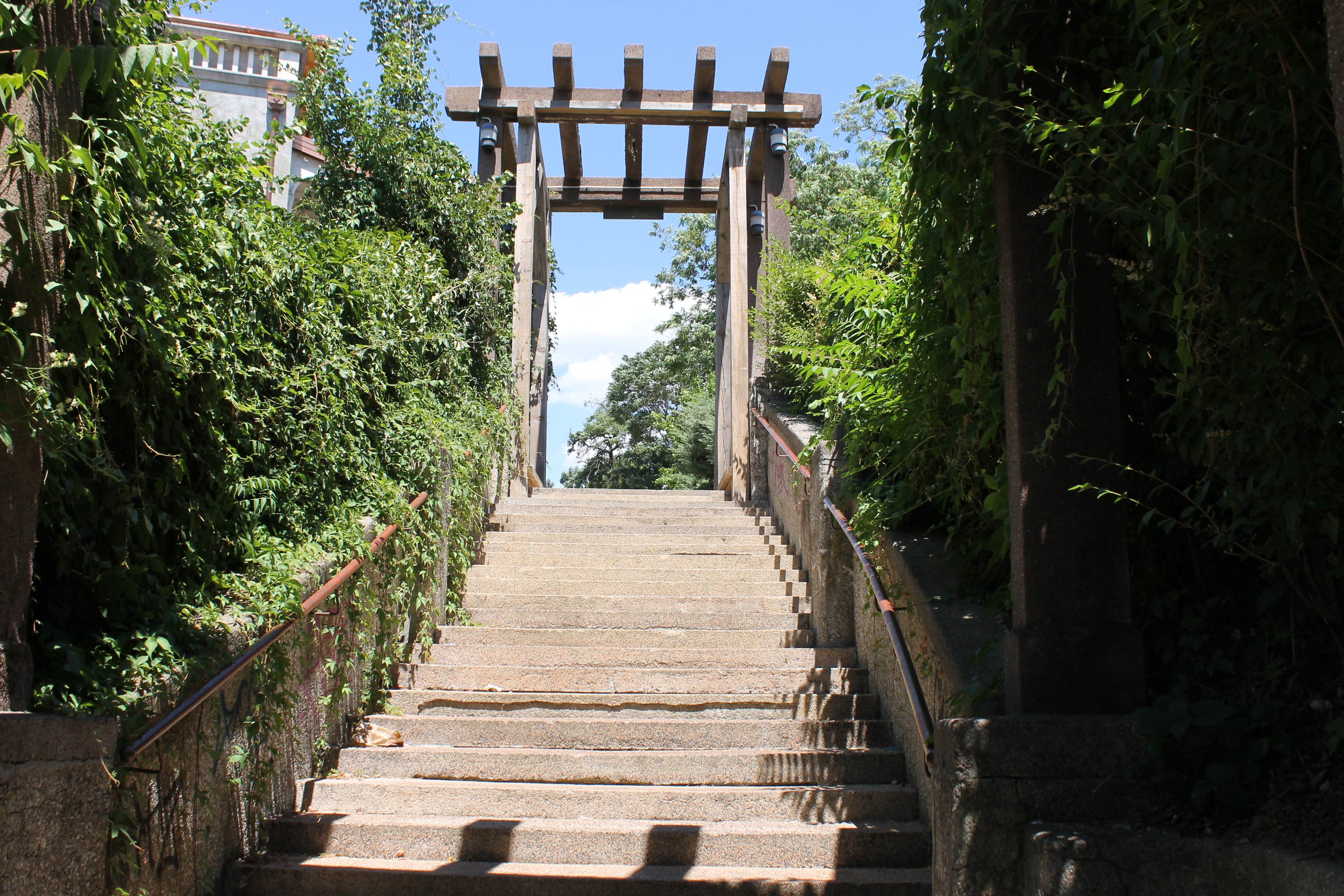 Let’s take a look at just three examples from the first part of the 20th century. All three are named after people with difficult last names: Schlosserove stube, Aleksanderove stube and Zakmardijeve stube. By now, you guessed that stube means stairs. For the first time ever, it’s easier to remember their architects than their names: Schlosserove and Zakmardijeve stube are designed by the architect of the last name Ehlrich, while the Aleksander stairs were designed by Ulrich. Ehlrich and Ulrich almost rhyme and their designs are as harmonious as a rhyme. 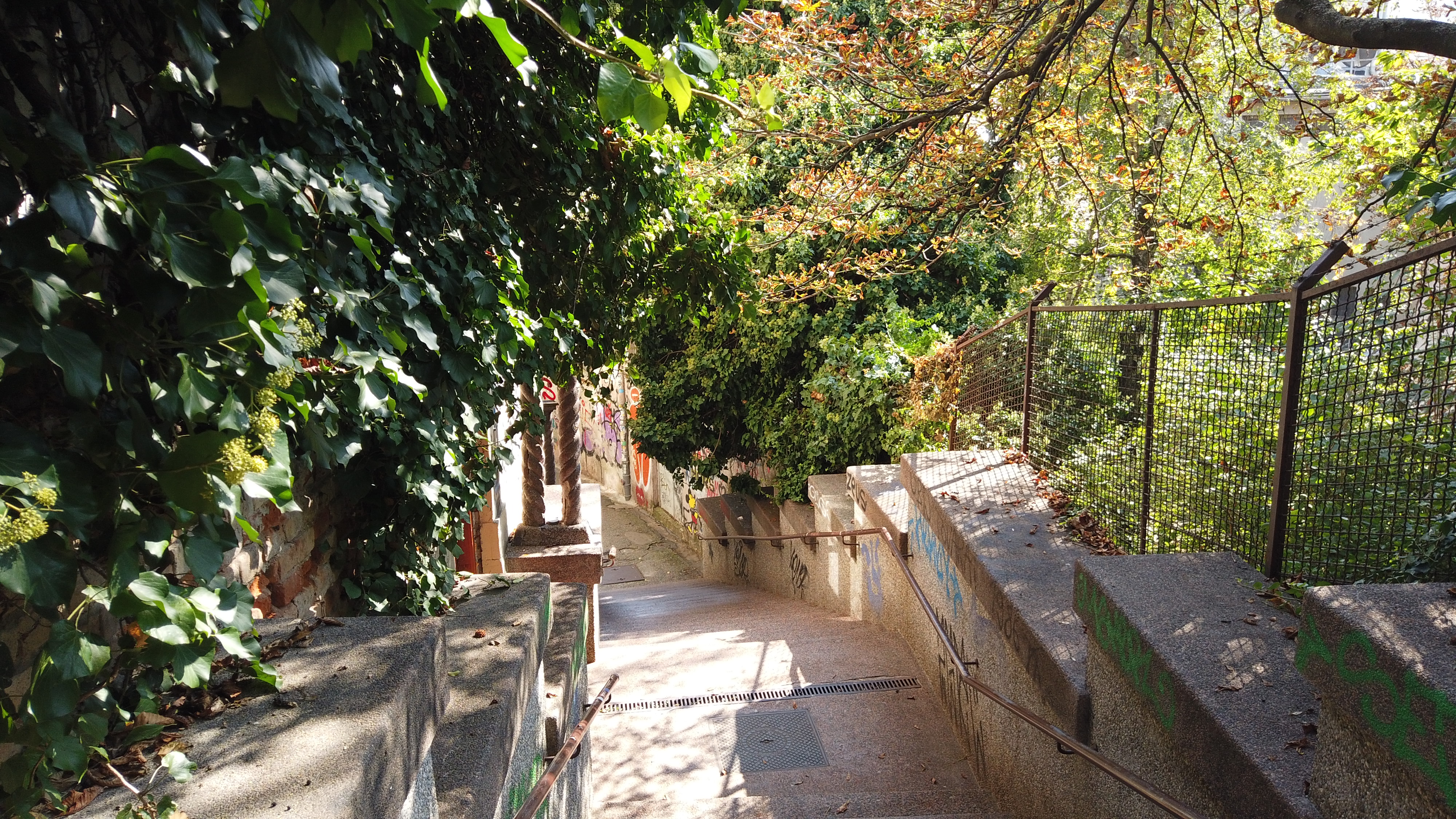 Zakmardijeve stube are a bit quiet right now, anxiously waiting for their regular visitors: tourists and high school kids. Two high schools in the Upper Town area were damaged in the 2020 earthquake and are being rennovated at the moment.

If you discover those stairs, take a better look at them and everything that surrounds them because there is a reason for every detail. The three stairways carry a strong signature of their architects, yet they are gentle and noninvasive.

For example, the access to Zakmardijeve stube is a bit hidden, though it’s so close to the main city square. Once you start climbing them, they start unveiling their might. First, you will spot the beautiful greenery around them, then you end up surrounded by a massive wall that simulates the medieval history of the Upper Town. After the climb, you are rewarded with an amazing view from the wall that spreads from the stairs to the viewpoint on top of them.

Don’t worry about climbing the Schlosserove stube in summer heat - the vine wrapped around the pergolas make a perfect shade and there are even benches all along. The benches are wide enough only for one person. If you’re with a friend, they can sit opposite you for a chat. 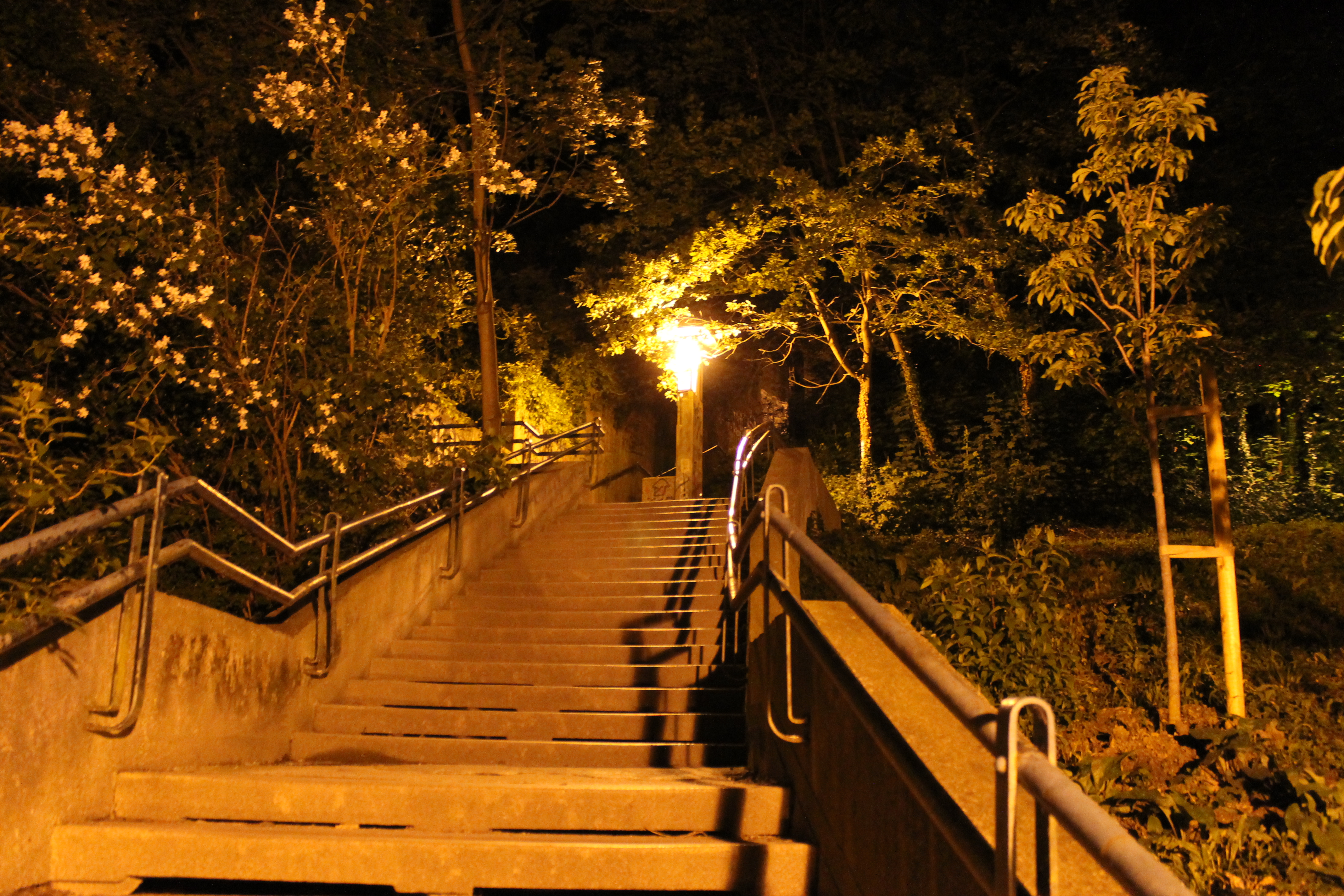 Do you really want to go up the Aleksanderove stube at night? They lead to a hill where a big cemetery used to stand once.

Aleksanderove stube are a true gem.  They have resting plateaus, lovely yet non-invasive lamps, oh and let’s not forget handrails with inconspicuous, but very unique details. They are in the humble service to people who use it, as comfortable and obedient as stairs can be. They also respect both nature and the city. Last but not least, they respect their architect by showing off his style and vision. That’s the harmony of famous Zagreb stairways that we admire and love. They not only follow the shape of the hill, but they also highlight it once you do notice them, and they make you wonder... what’s up there?

So, what is up there, really? The three stairways that I mentioned lead to three different hills. Zakmardijeve stube to the Upper Town. A lot of the history and famous sights of Zagreb, such as St Mark’s Church, the Lotrščak Tower with its cannon, the Stone Gate, are right up there, just a few puffs away.

Aleksandrove stube will take you to the serene Rokov perivoj park. It’s worth coming up there  to enjoy the beautiful villas that were once owned by famous Croatian artists, or to see the small 17th century St Roch’s church. 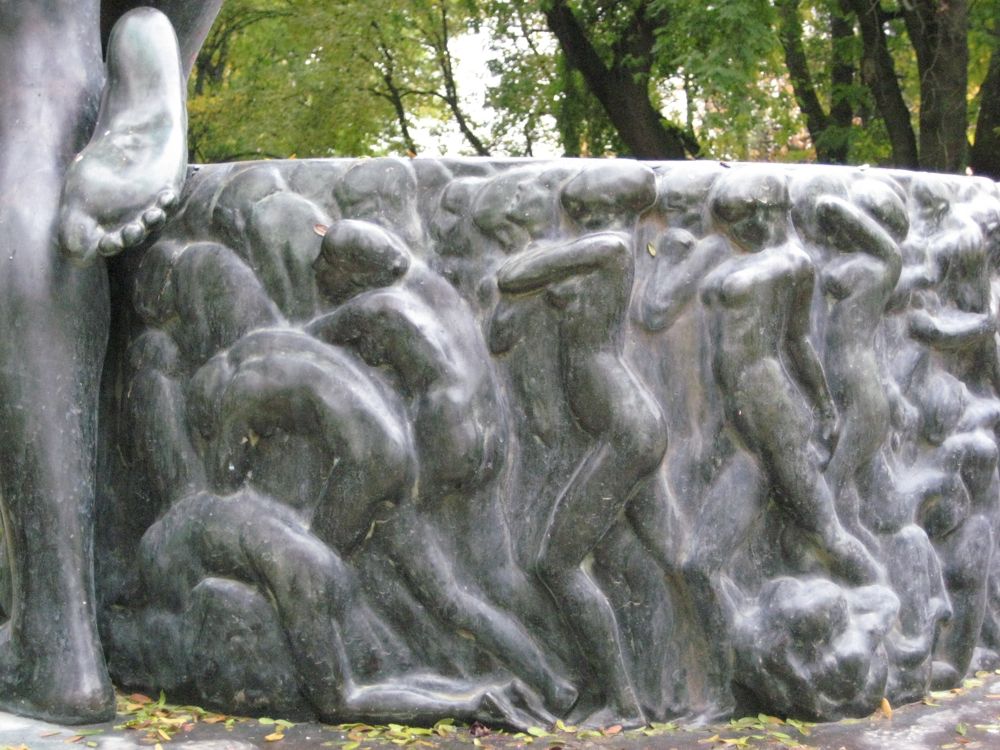 The fountain at Rokov perivoj is artwork by Robert Frangeš Mihanović, one of the artists who lived in the park

Schlosserove stube... Just the other day, a man was sitting on one of the benches at the bottom of the Schlosserove stube, looking at the city map.  He asked me if there was anything to see up there. Sure, I said... but then it got me babbling for a second. I mean, sure, do you know how many memories people like me, who grew up in this part of the city, have created on top of these stairs? It’s Šalata, you fool, what do you mean is there something to see up there?!... Then I started thinking more clearly and quickly talking about the once elite residential zone with its amazing homes and their “patina filter”, the sports center in the narrow city center, the beautiful hospital park...  I tried to convince him, but it didn’t work out. Someone more persuasive had told him earlier there was just a hospital, and he stayed  down there, sitting at the bottom of the stairs, staring at that map of his.  I know I would be pleasantly surprised and intrigued by all of the sights and details on Šalata or Rokov perivoj as a traveler.  I still can’t get enough of these areas even if I’ve lived here in Zagreb my whole life. 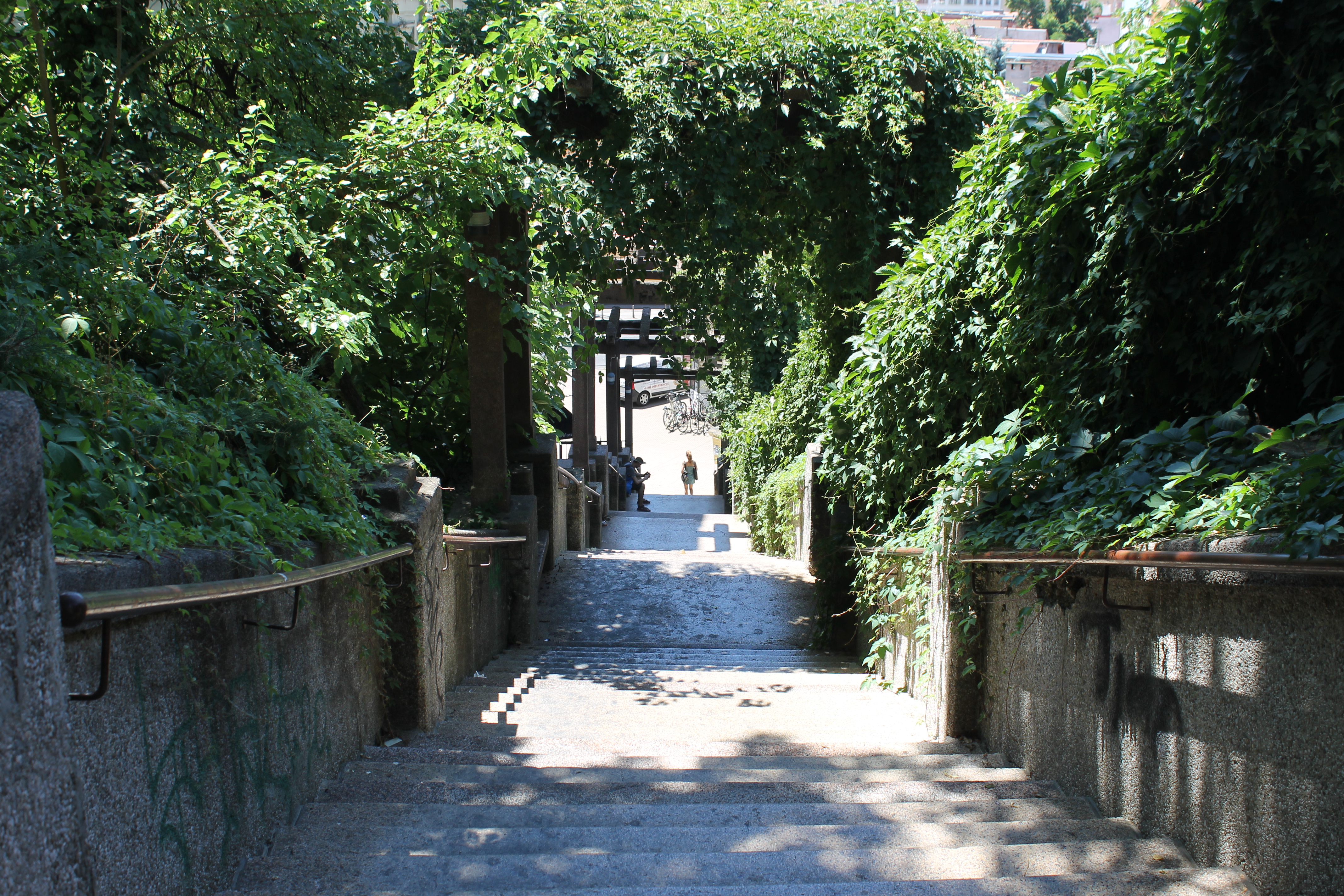 There’s my unshakable tourist in the bottom left part

Oh, forget it... Maybe I’m just being very subjective and these stairs have some imprint in the city’s memory that makes us, who live here, subconsciously reimagine tiny moments in our lives, even if it’s something as simple as the torture of carrying your ice-skates over your shoulders all the way to the top of the Schlosserove stube to a big skate rink in winter.  Maybe the stairs are really not the thing for you to look for in Zagreb and that guy with the map was right to remain seated.

If you’re more like him and this text of mine seemed to you a lot like babbling and wasn’t persuasive at all, Zagreb is still right for you. It still doesn’t have a monumental luxurious stairway decorated with dragons and floral details. But it does have the best way up to a hill: a 130-year-old funicular. 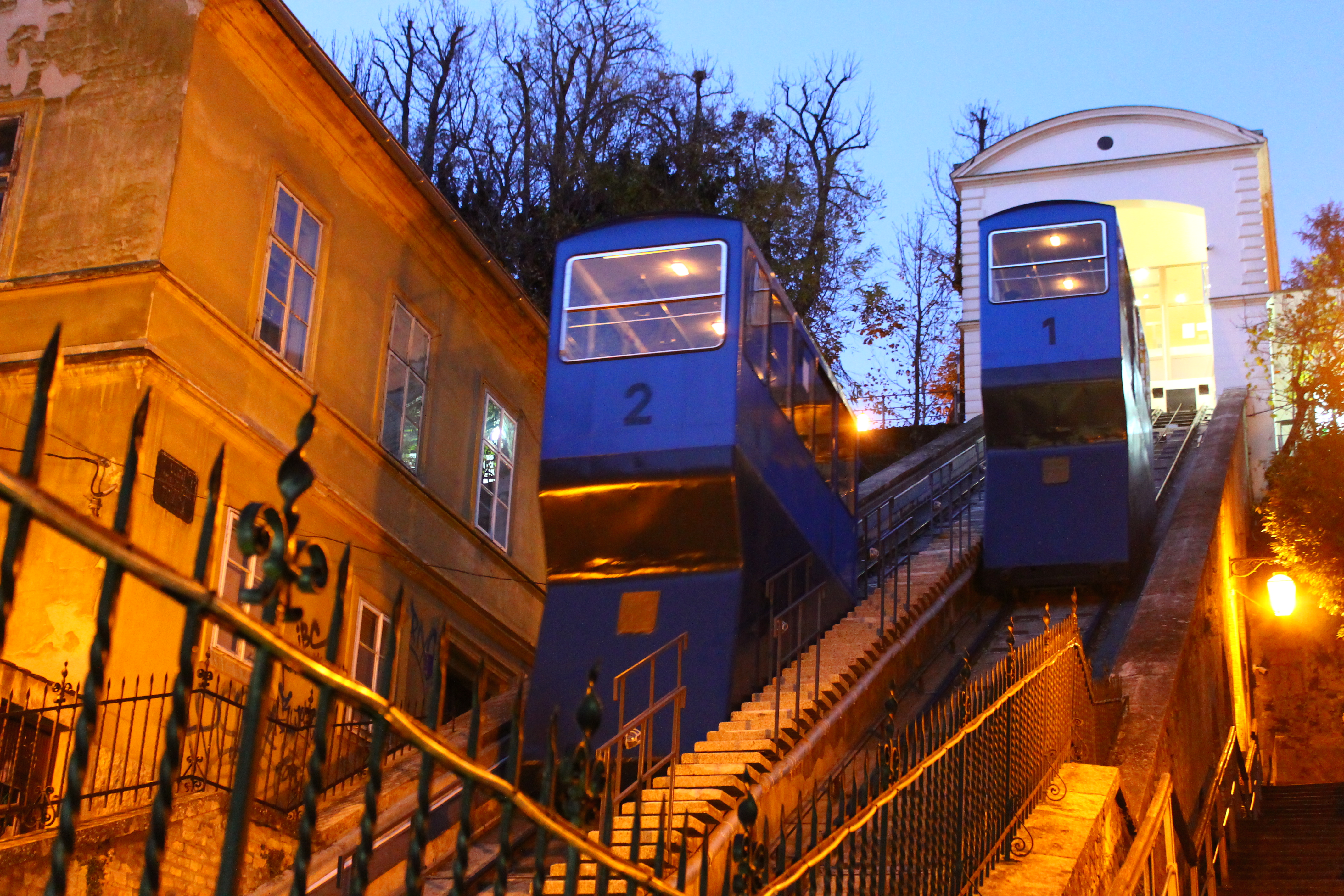 If you really hate climbing the stairs or simply can’t for whatever reason, there is still a fun option to get to one of the Zagreb’s hills

Race you to the top!