A story about famous Croatian soldiers from the 17th century that brought a necktie to the world of fashion. You can still see them today around St Mark’s Square in Zagreb.

The Cravat Regiment is the honour guard in Zagreb that celebrates the long military tradition of Croatia as well as the introduction of a cravat or a necktie that was brought to the world by the Croatian soldiers in the 17th century. The project was organised and developed by Zagreb Tourist Board  in cooperation with Academia Cravatica back in 2010.

The Cravat Regiment is the original idea of Marijan Busic, the director of Academia Cravatica and founder of a larger project “Croatia – Homeland of Necktie”. Their performance is a unique combination of spectacular march of the four horsemen and soldiers through the city center of Zagreb followed by very thrilling drumming squad and the ceremony of changing the guard at the St Mark’s Square (side entrance to St Mark’s Church), the Ban Josip Jelačić square, and the Statue of Virgin Mary on Kaptol.

After the end of the war with the Turks, Croatian soldiers came to fight in Europe for the first time in the Thirty Years' War (1618 – 1648). The Croats brought with them their own way of fighting a war which was developed during the long-term war against the Turks. The so-called "small war" consisted of ambushes, raids, daring penetrations and rapid withdrawals, attacks made into enemy territory, devastation and looting.

Croatian horsemen soon became known for their boldness, speed and courage, and they were vastly appreciated and feared for their talented military skills and laudable heroism. This kind of light cavalry regiments armed with short rifles were recognised as ''Croats'' or ''Croatian arkebuzirs''. In addition to the service of the Habsburgs, the Croats and all mercenaries of the time entered the service of other imperial armies, mostly catholic ones.

When France entered the Thirty Years' War, the imperial army and its regiments made up of Croats arrived in St Dennis, today's suburbs of Paris. The French in the absence of their own light cavalry have organised their own Croatian Cavalry Regiment. In the tradition of three regiments of the Croats who have fought for the French during the Thirty Years' War, the French King Louis XIV established an elite cavalry regiment Royal Croats (Royal Cravates) in 1667.

One piece of clothing of Croatian horsemen particularly attracted the attention of Europe. It was picturesque red scarves that Croatian soldiers tied in a knot around their necks as a part of their uniform. Officers carried some handkerchiefs made of silk while those for ordinary soldiers were made of wool, and it has served mainly for protection against dust and sweat and it could have been used for dressing wounds, as well.

The Parisians noted this Croatian custom and adopted it as their own fashion detail - wearing neckties 'à la croate', now forming the root of the French noun 'la cravate'. This was the beginning of the tie (cravat), today's most recognisable official clothing accessory. 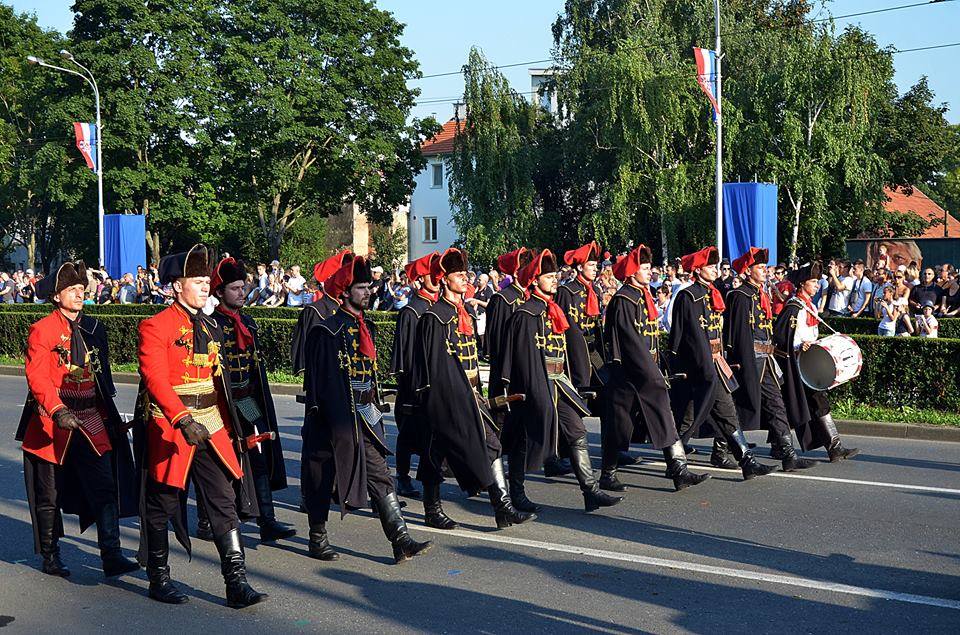 The regiment and the uniforms

The regiment consisted of a cavalry and a unit of soldiers followed by a squad of drummers called ''doboš''. The cavalry usually consisted of four horsemen, on special occasions even more, and it had the official banner. They wore red coats called ''surkas'' and black capes with white or golden patterns.

Besides the original neck scarf, the uniform of the regiment soldiers consisted of dark blue surkas or white shirts under the black cape. The soldier that was leading the regiment was called ''Arkebuza''. He held either the banner, when the cavalry was away, or a big rifle that was specific to the Cravat Regiments in the past. Behind the arkebuza was the first line which was reserved for the ''Stražmeštre'' (Straismeisters).

They were the commanding officers of the regiment, and were the only foot soldiers that wore the red surkas, just like the cavalry, and the cape only on one shoulder. On the commands of the Regiment Commander, they would lead the soldiers to their guard posts and later pick them up and return them to the rest of the squad.

There were usually ten to twelve foot soldiers in one regiment, all armed with the traditional sabres. At the back was the ''Doboš''. The Doboš consisted of three or more drummers that directed the walking pace of the whole regiment. Also, their drumming is one of the most recognisable parts of the ceremonial march of the Cravat Regiment, adding that very special ''spice'' to the atmosphere and the thrill to all the spectators. 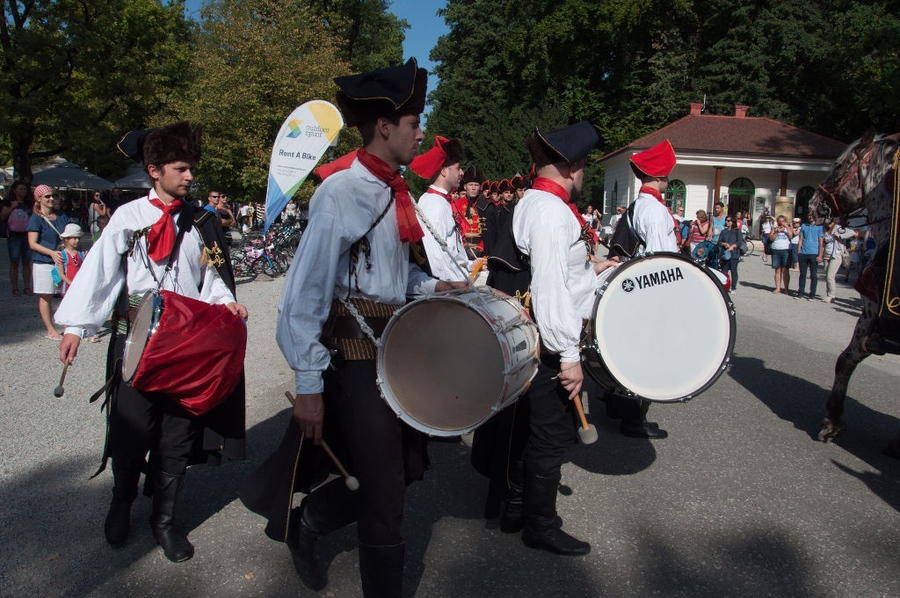 From the Christmas day to the halls of the European Parliament, today the Cravat Regiment plays a big role in bringing the Croatian culture to the world. The long lasting tradition is today celebrated by the ceremony of changing the guards that takes place at 12:00 am on Saturdays and Sundays at St. Mark’s Square, as well as on the City of Zagreb Day on 31st May, Cravat Regiment Day on 18th October and New Year’s Day on 1st January in Zagreb.

By their uniqueness, the Cravat Regiment shows how Croatian culture is uniquely contributing to worldly culture by celebrating the tie as the Croatian gift to the world, promoting the Zagreb as the ''capital of Cravat''.