The Most Valuable Hallmark of Zagreb

If you ask the citizens of Zagreb which are the hallmarks of Zagreb's culture, I am sure you will get these answers: Šestine umbrella, Šestine folk costume, 'Škrlak' also known as a hat and 'Lajbek' which is a vest. :)

Zagreb's traditional costume is one of the most picturesque Croatian costumes of exceptional value. And what is sure is that rich embroidery and weaving made Zagreb's costume known throughout the world. Numerous decorations and the diversity of weaving and embroidery placed Zagreb's costume on the list of UNESCO's intangible cultural heritage. But how can I know all this valuable information if you consider the fact that I was born and raised in the eastern part of Croatia, also known as Slavonia? Well, the story goes like this…

Zagreb's traditional costume is on the list of UNESCO's intangible cultural heritage.

Considering that I have spent most of my childhood and youth dancing different folk dances, it was logical to continue cherishing the folk art after moving to Zagreb. The second most important thing after moving to the capital and entering the University of Zagreb was to find an ensemble in which I will enjoy, dance and sing. Observing the work, love and passion of young dancers, players, singers and leaders of the folk dance ensemble Zagreb Markovac, I fell in love with this ensemble at the first sight. It is so deep and true love that it looks like it comes from three hearts. :)

There are no words to describe the work of FA Zagreb Markovac which has successfully worked in Zagreb, Croatia as well as on the European and world stage since 1945. Suffice to say that this ensemble draws its strength and quality from the great love of folklore, dance, song and above all true art. And when it comes to tradition and culture of Zagreb, it is not difficult to cultivate this art. Today, the ensemble has over 40 choreographed dances from almost all parts of Croatia as well as a variety of choreographed dances of Croats living abroad, such as Vojvodina, Bosnia and Herzegovina, Austria. Also, FA Zagreb – Markovac boasts with the wide selection of original vintage folk costumes of museum value including Zagreb's traditional costume.

Zagreb's costume is named after church from Šestine

Zagreb's folk costume was named after church from Šestine, which is located in the central part of Zagreb highlands. For the citizens of Zagreb, Šestine costume is much more than a souvenir. It has outgrown its native environment and, now, it closely relates to customs and life in Zagreb as well as to numerous citizens of Zagreb. You will agree if I say that the traditional costume is one of the most specific elements of identifying with homeland and its history. It can be said that traditional costumes discuss values and habits of a nation in an indirect way. Also, some groups of people wanted to highlight their uniqueness by wearing national costumes.

But, what does Zagreb's costume tell about Zagreb's residents?

Costumes for women represented the age and position in the society. Each phase of life and changes in life, from childhood, girlhood, marriage, motherhood, adulthood, old age to widowhood were manifested in the attire of women.

So, for example, the red color was intended for youth, while the darker tones were reserved for an older age. On the other hand, the white color meant sadness for someone's death. Zagreb's costume is characterized by the Croatian coat of arms on the hat and by the religious signs IHS on the belt. The main characteristic is that Zagreb's folk costume has no buttons and it is made of linen. The more the linen was yellow, the more the national costume was valuable. About six meters of linen is required to make the man's costume and about eight meters of linen for woman's. Sometimes women need an hour to put on all parts of the costume, numerous decorations and accessories.

It has national, religious and magical meaning

In addition to defining the status and age of the people wearing costumes, it is considered that certain parts of clothes carry a magical meaning, as well. First of all, this refers to the frequent use of red color that represents happiness, health and safety. Secondly, a shape of a unicorn found on head coverings is an ancient symbol of fertility. At that time, it was believed that "horns" protect women from magic spells and evil eyes.

One of the hallmarks of Zagreb's culture is the traditional Šestine umbrella which dates back to the middle of the 18th century. The Šestine umbrella is characterized by red cotton canvas with multicolored stripes: Šestine umbrella was recently declared the "Original Croatian Object" by the Croatian Chamber of Commerce. You can see Šetine umbrella on the main Zagreb market Dolac where they serve as sunshades. :) 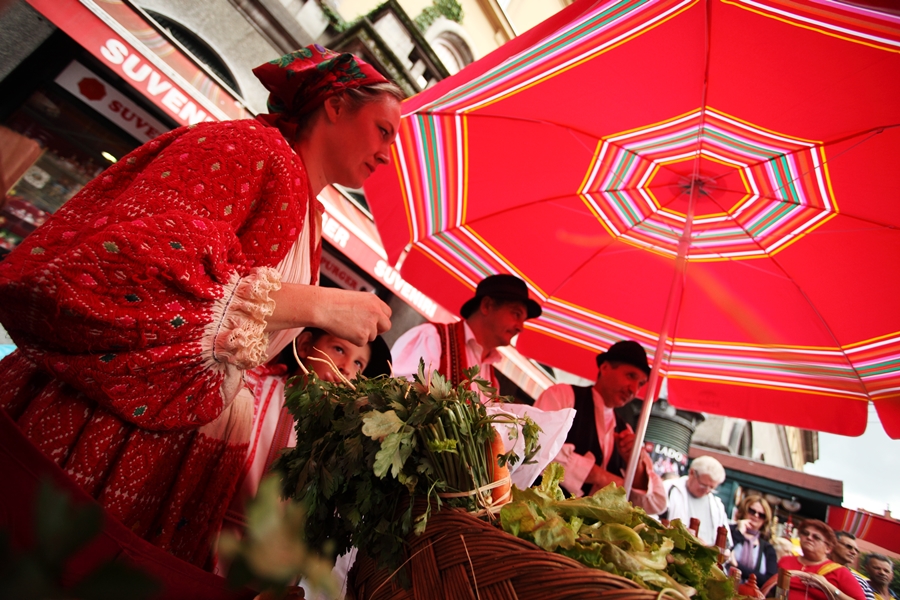 At that time, making costumes for women was their manner of expression and artistic conception of beauty. This is why we consider each woven or embroidered part of the costume a small work of art. So every time when my dancers from the folk dance ensemble Zagreb Markovac come out on the stage of some famous theater wearing Zagreb folk costume, you should keep in mind that you are watching small masterpieces and works of art on them. :)

Although it has been a long time since I stopped dancing, I'm glad that I had the honor to be a part of the best Zagreb ensemble. I'm glad I had the honor to cultivate long Zagreb culture and tradition in the best possible way, with the Zagreb songs, dances and the most beautiful Zagreb attire. There is a truth in saying that real art comes from the heart or, better said, the real art comes from the heart of folk dance ensemble Zagreb Markovac. :)